Recently, Matt Falcus started the Paris Book Club, to help bridge the gap between writings on Paris and Parisian life today. Read more about his mission and some of his favorite Paris books below. And between his 5 New Paris Books for Christmas post and his suggestions in our interview below, you may find yourself that much closer to finishing off that Christmas present shopping list! 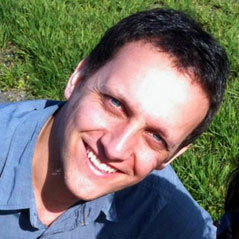 Could you describe for us the mission and focus of your website, Paris Book Club?

The purpose of Paris Book Club is to inspire people about Paris through the many books written about it. We’ve all heard, and probably read, books by Hemingway and Victor Hugo which are well known for their setting in Paris. But there are new books being written every year which are set in the city, with fantastic descriptions of life there, from café life to expats learning how to live there. The mission is to show people the many aspects of Paris as seen through writers’ eye (and words!)

How did you come up with the idea for Paris Book Club?

It’s really the story of how I came to love Paris. I hadn’t visited as an adult, but I read Fiesta: The Sun Also Rises by Ernest Hemingway and was hooked by the way he talked about the city. I then started visiting, and reading more and more books that were set in Paris. It then got to the stage that I wanted to share these books – especially the new ones which hadn’t yet become classics – and reproduce the different aspects of the city as described in a certain paragraph of the book.

Paris Book Club has frequent posts, which are also available via an e-newsletter. Tell us what we should expect to discover in a typical post.

In a typical post I look at one book which is either about Paris, or at least set in the city. I’ll take a paragraph which covers a certain aspect of life there – be it café life, learning to live in the city, the buildings, shopping, food, or markets – and talk about that aspect, and reproduce that paragraph to inspire through the words of the author.

If you’re signed up to the newsletter, it will then arrive in your e-mail inbox to hopefully inspire you with a little taste of Paris, too.

Which has been your favorite post thus far and why?

My very first post, naturally, had to be about Hemingway’s Fiesta: The Sun Also Rises. However, I very much enjoyed a post I wrote about the Catacombs and how they came into being. They are one of my favourite attractions in Paris, and in writing this post I also got to show that non-fiction, history books (in this case Andrew Hussey’s Paris: The Secret History) are just as inspirational in describing the place.

For those still looking for that perfect holiday gift for their Francophile loved ones, could you give us the names of a few books that seasoned Francophile may not have read already?

Some of the books I’ve read recently which may not have appeared on peoples’ reading lists yet include:

The Most Beautiful Walk in the World, by John Baxter
A Rooftop Soliloquy, by Roman Payne
Markets of Paris, by Dixon Long & Marjorie R. Williams

And for the novice Francophile, are there any “absolutely must reads” before visiting Paris?

After first ‘finding’ Paris through Hemingway’s The Sun Also Rises, I wanted more – both of the author and of Paris. A Moveable Feast is Hemingway’s love story to his days living there, recounting his day-to-day life as a young writer, the people he hung out with on a daily basis (who themselves are all famous authors and artists), and the places that were to become famous because he and his friends were there. He even gives addresses, so you can trace them yourself next time you visit. The book features one of the most famous quotes about Paris: “If you are lucky enough to have lived in Paris as a young man, then wherever you go for the rest of your life, it stays with you, for Paris is a moveable feast.”

Which is your personal favorite book about Paris?

The Invention of Paris, by Eric Hazan, is an epic work all about this city. Instead of being just a static history book, it actually takes you on a tour through the streets and locations that have formed Paris into what it is, covering all of the important events that you probably had no idea, or knew very little, about. For those interested in the literary history of the city, it has plenty on the characters that were so well known in producing such important works of art and writing that led to us talking about this very subject today!

Which is your personal favorite book set in Paris?

My favourite book set in Paris is still Ernest Hemingway’s Fiesta: The Sun Also Rises. It might be set in the 1920s, but it really reflects what a great place it was to live as an expat enjoying the nightlife, cafes and relationships to be found there, set around a great story and characters.

Which is your personal favorite English-language book written by a Paris resident?

A book about Paris doesn’t have to be deadly serious. A Year in the Merde by Stephen Clarke – a new resident in the city – has become a classic and deals with the realities of moving there, taking a job, and learning to live amongst the French. Written with great wit and descriptions of this new world he found himself in, it’s a book I’d very much recommend.

Which is your personal favorite French-language book written by a Paris resident?

Although I don’t speak French, I’ve read and loved translations of books by Emile Zola such as Therese Raquin, and the eternal Hunchback of Notre Dame by Victor Hugo.

Which is your personal favorite book of 2012 that has a tie to Paris?

A great, recent book which is ideal for someone who already knows Paris quite well, or is thinking of spending more time there, is Paris Revealed – The Secret Life of a City, by Stephen Clarke. It’s full of useful, and not-so-useful, facts and observations about the city and its residents.

What would you consider the top five literary landmarks of Paris?

1)      Shakespeare & Company book store on the rue de la Bûcherie, opposite Notre Dame. Although this isn’t the location of the original shop which was a haunt of F Scott Fitzgerald, James Joyce, Hemingway, and Gertrude Stein, it is still a place of pilgrimage whilst in Paris if you love books. It is packed to the rafters with new and old books, and you can happily while away hours there.

2)      Montparnasse was the heart of artistic and intellectual life in Paris from the early 20th century. The most notable writers, artists, poets and politicians living in Paris at the time would frequent the area, and in particular the Café du Dôme (see below).

3)      Honoré de Balzac’s house, 47 rue Raynouard. He was one of Paris’ greatest resident writers, and put his life in writing in the 1853 La Comédie Humaine series. Today it’s a museum that you can visit.

4)      Les Deux Magots café situated on Boulevard Saint Germain des Prés is another famous haunt of the well-known writers of Paris’ past. Today it still looks like an old Parisian café, so draws a lot of attention from tourists. As well as a place that writers and artists would congregate, it also gets a mention in numerous works of literature, including Lolita by Vladimir Nabokov, and The Chariot Makers by Steve Matchett. The café even awards an annual literary prize to a French novel.

5)      Gertrude Stein’s house at 27, rue des Fleurus in the 6th arrondissement is not accessible to the public, but the plaque outside marks the spot where writers and artists would congregate to spend time with her and her partner Alice B. Toklas. Stein had an impressive art collection, and would often offer advice to struggling writers, in between writing her own works, such as Three Lives.

Which is your personal favorite spot in or around Paris (park, restaurant, café, landmark, neighborhood) for inspiration? If you were to sit down somewhere to write the first few pages of a novel, where would it be?

The Café du Dôme on bd. Montparnasse is my favourite place for inspiration. It is a historic venue frequented by all of the great artists in days gone by. It was so notable that people such as Picasso, Lenin, Henry Miller, and Jean-Paul Sartre who could regularly be found here were dubbed Dômiers. Today the café is a restaurant with a great décor and great food. I love sitting there and imagining the people who have dined in the room over the years.

Thank  you, Matt, for sharing your story and your reading list suggestions with us!