Currencies, Exchange Rates and the State of the Euro: An Interview with Peter Lavelle

What is the best way to transfer money from one currency to another without paying excessive commissions? What is the smartest way to handle different currencies when traveling? What is the future of the euro and Greece’s role in this collective? Recently, I spoke with Peter Lavelle of foreign exchange broker Pure FX about these topics and more. While Peter’s thoughts are useful, especially for expats living abroad, keep in mind that these are Peter’s views and not necessarily the best advice for you. I encourage you to do your homework before carrying out any significant currency exchanges! 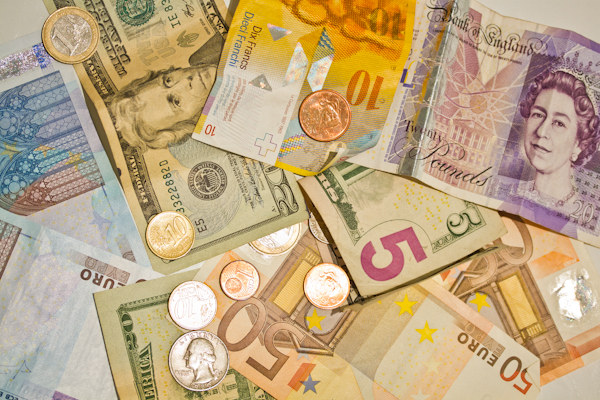 Peter, what is your professional background?

I’m a writer by profession, and was hired by Pure FX a couple of years ago pretty specifically to write articles that visitors to our site might find helpful. That means I tend to mix between evergreen stuff about how best to send money abroad, as well as updates about what’s affecting the exchange rate.

Before Pure FX, I wrote for a printer inks manufacturer, ran a business writing CVs for non-native English speakers, and before that I did my two degrees in English Literature.

Could you tell us a bit about your company, Pure FX?

Pure FX is a foreign exchange dealer, which means we help people to transfer money abroad and into different currencies. Most of our clients are expats – people buying a second home abroad and that sort of thing – and businesses involved in exports and imports. We set up in 2006, and are based in Beaconsfield outside London, although I personally live in Madrid.

What are the services your company provides that might be useful to:

…foreigners planning a trip to France or another euro-zone country?

We’re a foreign exchange broker, as opposed to a bureau de change, so that we don’t change holiday money. In fact, our minimum transaction starts at around £5,000 or equivalent.

But that doesn’t mean we don’t get calls about holiday money, and if someone calls about it we’re usually pretty happy to point someone where they can get a good rate.

If you’re just about to move to France, we can give you a good exchange rate for the transfer, as well as personal guidance throughout the process. That means things like whether locking in the exchange rate is right for you, to protect you against future declines.

We’ll also talk to you about what’s happening on the foreign exchange market, which is clearly crucial to get a good rate. Foreign exchange brokers can’t really differentiate themselves in terms of what they do (it’s moving money from one country to another, whoever you use) so the emphasis is definitely on service.

If you’re already in France on the other hand, we can help you make regular transfers in and out of the country, as well as repatriate funds if that’s what you want to do.

…French residents or citizens planning a trip outside the euro-zone?

Again, if you’re just planning a trip, there’s not much we can do but point you in the right direction.

When you travel to a region with a different currency, what steps do you recommend to make sure you get the best possible exchange rate?

1. Start looking at the rates as soon as possible. The earlier you look, the less chance you’ll be caught having to accept whatever rate is available at the last minute. To check the exchange rate, you can use Google. Just enter the currencies you’re changing onto the home page and the amount (for instance “100 EUR to USD”) and it’ll return the current rate.

2. To find the foreign exchange broker offering the best rate, travelmoneymax.com cannot be beat. Just enter the currency you want and the amount, and it’ll return a table of the rates available (Unfortunately, this is a UK website, and so assumes you’re starting with pounds.)

3. Avoid the airports and hotels, which universally provide the poorest rates. This is because they tend to be used by people changing currencies last minute, and so can get away with not being competitive.

Why shouldn’t you just take money out of an ATM as you go while traveling in your destination country?

Because you’ll get charged. It’s something in the range of £1.50-2.50 each time you withdraw cash, at least for cards issued in the UK. That includes virtually every high street bank you can think of, including HSBC, Natwest, Santander and Lloyds TSB. So unless you have a specialist card intended for use abroad, it’s something to do only in emergencies.

Are travelers cheques a thing of the past or are there regions where they are still advisable? What can travelers do to protect themselves from theft?

I don’t have much experience with travelers cheques, but from what I’ve read they provide quite poor exchange rates, while the number of places they’re honored is declining. To protect yourself against theft, you’re better off buying a pre-paid credit card, such as those from Caxton FX and Fair FX, which can be cancelled if they’re stolen, and easily replaced.

Are there any tips you have relating to currency exchange that are specific to France or are the same considerations applicable for all euro-zone countries?

Since 2003 and the introduction of the euro, the European Union has taken a lot of steps to remove the differences in sending money between European countries. So in theory at least, sending money to the UK from France should cost the same as sending it to Spain. In practice though, this might not be the case, and it’s best to speak with your banks (both UK and French) to find out what charges they apply.

In addition, if you need to open a French bank account, there are some fantastic resources at french-property.com and paris.angloinfo.com on how to do so.

Give us your predictions on the exchange rates – in particular the relative euro/dollar/pound rate – in the next six months.

The euro is going to do one of two things in the next six months, and that’s sink or swim. If it looks as though Angela Merkel and co. will do nothing to bring the crisis to an end, it’s likely the euro will continue to weaken, if not (in a worst case scenario) cease to exist entirely.

If on the other hand something is done (such as creating a United States of Europe or equivalent) the euro could strengthen significantly. But for me, it would take end of the world kind of stuff to bring the Eurozone to that kind of action. So the euro is going to weaken, and in particular against the US dollar.

The pound forecast meanwhile is a bit less certain. Sterling is already close to 4-year highs against the euro, but it could be a lot higher if the UK weren’t in recession, and so closely connected to the continent. If the UK can avoid being implicated in a euro panic, it might gain, although in either case I see it weakening against the USD, which is big enough and far enough away to be much more attractive.

Do you think Greece will stay in the euro or will we be seeing a reappearance of the drachma?

I think this talk of Greece leaving the euro is overstated. Greece doesn’t want to leave the euro, and neither does the Eurozone want it to go, because of the harmful consequences that might have for the rest of the continent. What we’ve been seeing in the newspapers and markets this past week is reaction to the possibility that it MIGHT happen, which is pretty far from it actually coming to pass.

If Greece does leave the euro-zone, what will that mean for the euro and for people saving in euros?

For the euro as a currency, it could be fatal. It would open the door to Portugal and Ireland leaving as other bailout recipients, as well as indebted countries like Spain and France. Greece might be a small nation, but the symbolic importance of its exiting cannot be overstated.

For people saving in euros (which includes me, by the way) you’d be fine so long as the country you were in kept using them. But if it decided to change to a national currency, then your savings would be redenominated too. Depending on whether you’re in a country whose currency would strengthen, such as Germany, or weaken, such as Spain, that would be good or bad for your bank account.

Do you have any final financial advice for travelers?

If Greece returns to the drachma, then holidaying there will probably be extremely cheap. I’d book a hotel in Athens before all the rooms go!

Thank you, Peter, for these informative tips and predictions!