This fall, I went to my first annual Assemblée Générale des copropriétaires, or General Assembly of Co-owners. We were summoned to this General Assembly meeting by an official convocation. Sounds like the shareholder meeting for Coca Cola, or maybe a third legislative branch, right? Well essentially, it’s a homeowners’ association or condo association meeting. Furthermore, we are only six owners in total and only four showed up. Apparently this was a record turnout too, as I was told it’s normal for just the owner of the 4th floor to show up and no one else. 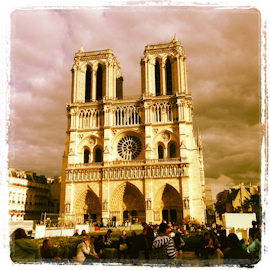 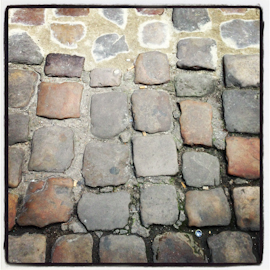 I was quite interested to see what this meeting would be like, but also a bit nervous. I had never met any of my neighbors, as I had not yet moved in. My move-in date was planned for the following week, as renovations had (of course) gone past schedule. So not only was I meeting these people for the first time, in addition they were all going to hate me for the five months of noisy renovations they had endured because of me. To make things worse, the 5th-floor neighbor sent a 2-page purported addendum to our 21-point meeting agenda, complete with illustrative photos, by e-mail the morning of the meeting.

The meeting was held in the offices of the syndic, somewhere out in the bowels of Belleville. The syndic is the person or company designated by the General Assembly to manage the building and its common spaces on a day-to-day basis.

Following instructions, I took the elevator to the top floor, but then saw only a door marked “Architect” so checked my calendar again, but as I was doing so, a frail woman appeared and ushered me in, assuring me I was in the right place. But when I got inside, I was still not so sure.

The long, narrow conglomerate of offices was lined with papers stacked to the ceiling and odd metal cabinets with 1970s-style mirrors. The office of our property manager was even more eclectically construed. The décor was a cross between 1970s office building, aquarium, Wild West lodge/safari, metallurgy workshop and lawyers’ office (i.e. lots of papers everywhere). And the icing on the cake was the head honcho himself – he claimed to be an architect/property manager, but I am quite certain he is Santa Claus’s long-lost French brother.

The setting was odd, to say the least, but somehow it gave me a feeling of relief, as a one-in-a-million (technically, one-in-25,000 give or take) American in Paris could not be seen as more of an oddball than this character!

As we made our introductions and I made mental notes of which owners lived in their units and which rented, and of course, which seemed nice and which seemed like potential trouble-makers.

We started going through the agenda, point by point. Many were budgetary questions. As I had not yet lived in the building, I was quite happy to defer to the others on what seemed like reasonable expenditures, and when I doubt, erred on the side of more money, rather than less money, to keep the structural components and common areas of the building up to snuff. (With all due respect to the French, I would note here that an American’s idea of “up to snuff” would generally be a much higher standard than a Parisian homeowner’s standard, at least when it comes to common areas, so I was quite fiscally liberal on these budgetary matters).

There were a number of points that did not concern me – so I thought. Until the other owners started chiming in as if these were life or death decisions. For example, the 1st-floor owner apparently was compromised by the devil, as she failed to have proper moldings and exact replica doorknobs on the outside of her apartment doors. I was the only co-owner not terribly concerned. I started to think something was terribly wrong with me as this deviation from the norm did not keep me up at night, as it clearly did the others. After about 20 minutes’ back-and-forth, Mr. Claus’s round and beady spectacled eyes caught mine and I took it as an encouragement to state my heartfelt opinion: “I really don’t care what sort of molding someone else chooses for their door and I don’t really understand why anyone else cares.” Unfortunately, that did not put the question to rest. The embarrassed owner swore to rectify the situation ASAP and the minutes of the meeting were updated to reflect this admission of guilt and promise of modification.

I should note here that of course I spoke in French at the meeting, but I did pull the American card when they all looked to vulnerable me as a potential secretary to record the minutes of the meeting. “You couldn’t possibly entrust this task to a non-native speaker!” It’s about time I found an opportunity to throw the vous avez un petit accent observation right back at them.

I got more nervous as we descended the list, as one particular item actually concerned me: whether I could retain the use of the stairway closet that is not technically mine, but that the previous owners had exclusive use of. What was somewhat troublesome to me was that Mr. Claus saw fit to add this item to the agenda of his own free will, without prodding from any of my neighbors.  Now why did he have to go bringing up topics better off forgotten? To my good fortune and astonishment, the issue went my way. They did not want me to purchase the closet, as they wanted to leave open the possibility of some day squishing an elevator into this ¼ telephone booth-sized space. But I get to keep using it until they find a way of disproving universally accepted geometric principles (and retain the only key) – even better.

Suffice it to say, the meeting ended amicably. I probably won’t see most of the other co-owners until the same time next year. Was this a good use of my afternoon? I’m not so sure all the fanfare and formalities were necessary from a purely property management standpoint. But from a sociological perspective, I felt lucky to participate in this display of local democracy (among the landed gentry) at work, this very French institution called the Assemblée Générale des copropriétaires.