Getting a French Driver’s License – Part 1

If you have been residing in France for more than 1 year, you are required to get a French driver’s license. There are two ways of doing this. The first and easiest option is to trade your current driver’s license in for a French one – but this route is only available for EU license-holders, license-holders of select other countries and holders of licenses from a handful of the 50 United States. (When I last checked, the list included: Arkansas, Colorado, Connecticut, Delaware, Florida, Illinois, Kansas, Kentucky, Michigan, New Hampshire, Ohio, Pennsylvania, South Carolina, Texas and Virginia.) The second way is to re-do driver’s ed. 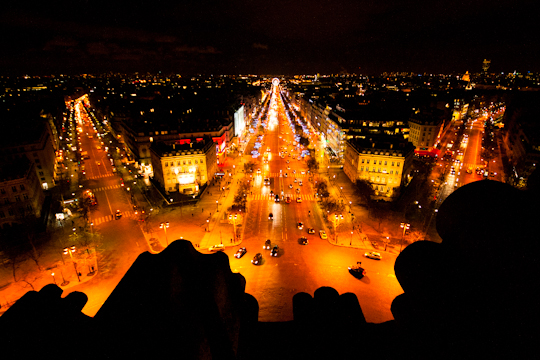 The Champs–Élysées and all its glorious traffic, as viewed from the Arc de Triomphe

I had a New York license and ultimately switched back to a Massachusetts license, but neither is exchangeable for a French license. I didn’t want to re-do driver’s ed. But I caved in and signed up with an auto école just before my 1-year mark.

I started Driver’s Ed #2 with the 2-hour “supervised driving” evaluation. My instructor began by asking me for how many years I had my New York license. “Almost 3 years,” I said, “but I had a Massachusetts license for about 13 years before that.” Five minutes later the instructor asks, “When you drove in the U.S., did you ever drive on the highway?” You get the point. And the director the the school was even worse: due to some miscommunication over a faulty photocopy I became an auto école drop-out – or I got kicked out – I’m not really sure which.

I had pretty much given up on the French license idea. But then a new auto école opened right near the office and a group of friends from work decided to sign up together. OK, I’m in! Time to bite the bullet. We signed up with Edukar at Place des Ternes in the 17th arrondissement. First, we had to pass the Code de la Route test (the written exam on driving rules). Then we could sign up for the actual driving test.

Overall, I was quite happy with Edukar. But let there be no mistake about it. For the written exam prep, there is no actual “école“in “auto école“. They do not teach you a thing. They just give you a book to study and a password to access online exams and they let you come into the agency for “classes,” which are those same practice exams you can access online, but in room with other people, better simulating actual test-taking conditions.

For a long time, I put off studying. I even downloaded a Code de la Route app for my ipad and purchased an additional book with a CD of testing questions.

“What’s the big deal?” you may ask. I barely remember studying for the Mass. driving test when I was 16. I do remember taking the test – I think you had to get 9 out of 10 questions right, most of which asked you to identify a stop sign or read a speed limit sign (very difficult, when the sign reads “30 SPEED LIMIT”). Well the French exam is nothing of the sort. A joint degree in pharmacology and calculus would still not guarantee you passing the French exam. One of my lawyer friends passed the Paris bar exam but failed the written driving exam.

Time was running out. I was determined to get my license before Christmas, or at least before February 3, 2013. Why this seemingly arbitrary date? It would be the 20-year anniversary of my first driver’s license! So I buckled down and started cranking through he online exams. At first I was doing horribly. But the more I did the exams, the more I got the hang of it. In fact, I actually started memorizing the questions after a while, which was bad. I wasn’t even looking at the substance anymore, I just knew the answer to the question with the firetruck was “B” and the answer to the question with the windy road in the mountains was “C” and “D”.

Before you can sign up for a spot to take the exam at the police station, Edukar requires you to pass two practice exams at their agency: you need two 35/40s. I suppose it’s smart, as they have limited testing dates to offer their students.

Some of my friends complained that it wasn’t fair I was scoring better than them when I had not been studying for as long. To which I replied “BUT I DRIVE! You don’t. You should be happy I am scoring well.”

In the end, I studied seriously for about 2 weeks, meaning I did about 6-10 practice exams each day, most days. Each practice exam takes less than 10 minutes, or 20 minutes if you listen to the explanations of what you got right and wrong.

When I was finally scoring consistently over 35 on the online practice tests, I went to take my first exam at the auto école. This is helpful because it simulates the actual test-taking situation to a degree. First, because there are other people around you and you can’t hit “pause,” and second, because you can use the actual télécommande or remote control to punch in the answers and get used to that process. I got 37 on the first in-class practice exam and went back the very next day to take my next exam – before I forgot everything!

The school gave me a test date for a week or two later. I showed up to the préfecture (police station) at 92 Boulevard Ney early as I did not want to take any chances. (I also thought it wise to take the metro and not drive to my driving exam.) It’s not the nicest of Parisian neighborhoods. When they finally opened the building, I still had to wait almost an hour past the scheduled time for the exam. We were assigned seats, given our remotes and led through a practice question to test the remotes. Then the exam started.

There are rumors out there that the actual exam is easier than the practice exams the auto écoles give. I’m not sure if this is true. Certainly some of the questions are easier, but the fact that they are phrased in a slightly different way from the practice questions you will become intimately acquainted with can throw you off a bit, especially non-native French speakers.

At the end of the exam, the monitor calls you up by school, enters some code into his little machine that looks like a cash register, and announces in front of everyone if you passed or not. The cash register spits out a receipt with the exact number you got right. I got 37. It still bothers me that I will never know which 3 I got wrong.

Still, I passed! But that is not the end of the story. Stay tuned for Part 2 next week: the actual driving exam.