A Shout-out to My Hometown

This time it hit particularly close to home.

I was born at what is now Brigham and Woman’s, one of the hospitals where many of Monday’s bombing victims were taken. I grew up in Concord, MA, home of the shot heard ’round the world. I remember being surprised when I first learned that April 19th or Patriot’s Day is not a holiday nationwide. It is such a festive day in the Boston area. When I was little, the biggest thrill was getting to walk in the middle of the street when it was closed to traffic in anticipation of the parade. But of course I quickly began to associate Patriot’s Day with the running of the Boston Marathon.

On April 15, 2002, I ran the Boston Marathon. I was certainly not an elite athlete, but I poured everything I had, physically and emotionally, into training for the three months leading up to the big day. I trained on the marathon course, running the last 9 miles every Thursday evening with my track club. I crossed that finish line dozens of times, but nothing could have prepared me for the real thing.

Boston, more than any other place I have ever lived, is a city of runners. Even if you don’t run, you know the marathon course. Everyone is respectful of runners, and in the weeks leading up to the race, even the (we) notoriously aggressive Massachusetts drivers yield to runners unconditionally. 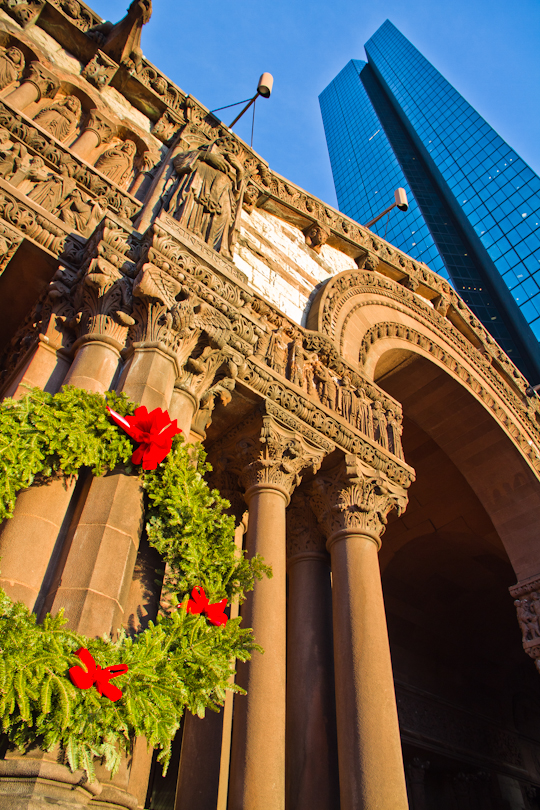 A peaceful Copley Square this past Christmas

I have been to the New York and Paris marathons and as exciting as they may be, the atmosphere does not even come close to the atmosphere along every inch of those 26.2 miles from Hopkinton to Copley Square. In Boston, everyone is cheering at the top of their lungs. Strangers encourage you to take that next step as if their lives depend on you finishing. People hand you food and water. Everyone is your friend, your personal cheerleader. Everyone is united with one common goal — to entice every last runner, no matter how fast or slow, to finish the race.

I remember the approach to the finish line vividly. I was exhausted not only from the distance, but from those last few miles of hills, hills and more hills. But I was elated. My mom was waiting for me at the finish and miraculously found me only minutes after I crossed.

It was most definitely one of the best and most special days of my life. I was proud of myself, but so much of my happiness was thanks to the immense outpouring of support I felt from the onlookers. Onlookers is not really the right word — it’s too passive. The fans at the Boston Marathon are active participants in this yearly ritual. Bostonians turns running into a team sport.

I ran Boston just months after September 11, 2001, and yet I can tell you: there was nothing further from my mind that day than the threat of a terrorist attack. The idea of a terrorist attack in the middle of this joyous occasion was completely outside the realm of possibilites.

My heart of course goes out to the victims and their families. And my heart also goes out to the thousands of runners who worked so hard for this day and who were denied the great joy I experienced that day — either because they were not allowed to finish or because they did finish but then the happiness was quickly overshadowed by sorrow.

Sadly, the Boston Marathon will forever be associated with these terrible events. But I am also certain that the runners and the supporters will be back next year on Patriot’s Day even stronger and more determined than ever.

Addendum: If you would like to make a donation to help the victims of the bombings and their families, here is one reliable option set up by Massachusetts Governor Deval Patrick and Boston Mayor Tom Menino: The One Fund Boston, Inc.