Those of you who read my post from last fall, In Search of a Quincaillerie (and of course those of you who happen to live here) know that finding what you need in Paris is not always easy or straightforward. 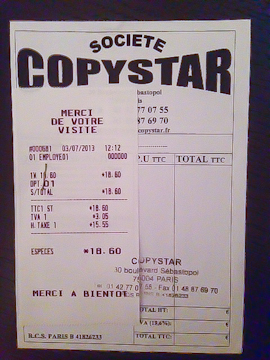 Today I was led on another seemingly endless search, though this time for what I thought was a much simpler target. I simply needed to print out a few documents. This is a simple task that I took for granted in the five years I worked for a large law firm in Paris. Now that I work from home and do not have a printer here in Paris, I have to think about these things.

I needed to print a mere 40 or so pages of documents from French immigration. Last month when I needed to print out documents, I found a shop on rue du Renard, near Beaubourg (as the French call it — Americans says Centre Pompidou). Their price was tantamount to extorsion. 60 or so pages cost me over €60. Yes, they were color copies, but still!

So not wanting to repeat that budgetary wound, I went up to rue de Bretagne because a friend had told me “every other store [there] is a photocopy store”. In fact the first store I came upon was a copy store. Excellent. I asked if I could print out a few documents from my e-mail. “Of course,” was the response, “But now? You can print in about 40 minutes.”

I really didn’t want to wait around for 40 minutes to do a 5-minute task. The owner of the shop was pleasant and directed me en haut (“up”) to another street — though I did not quite catch the name of the street. I had never heard of it. He gestured such that I figured it was right around the corner and impossible to miss.

I missed it. So back to rue de Bretagne. But I didn’t see any more copy shops. I tried googling again but it came up with nothing in the vicinity so I decided to walk towards rue de Renard to get robbed again. Better than not turning in my immigration documents on time.

On the way to rue du Renard, I happened upon a shop with a huge sign outside: “COPY”. The shop owner didn’t see me at first and was blocking the shop entrance, but finally apologetically let me enter. She was very sweet, but explained that they were grossistes, in other words, they worked on big company jobs only and didn’t do small copy jobs for mere humans me. She suggested I head towards Les Halles and when I asked where more specifically — I can’t find myself let alone anything else in Les Halles — she sent me towards la rue du Grenier-Saint-Lazare where the “Pakistanis don’t charge a lot”. I had never heard of this street, but luckily Google Maps had.

I arrived at this little street not far from Metro Rambuteau and did find another “COPY” store. I walked in and eventually the woman behind the desk took notice of me from behind her cloud of cigarette smoke. Apparently, you can still smoke indoors in some offices in France (oh wait, I almost forgot — a few VIP partners used to smoke in my old office too!) The woman looked at me as though I had three heads when I asked her if I could imprimer quelques documents. She told me to go to the internet cafe on Boulevard Sebastopol, next to the KFC (pronounced “Kah Eff Say”).

Arriving at Boulevard Sebastopol, I immediately saw a Euro Fried Chicken and wondered if the women had meant to send me towards this establishment, but I googled “KFC Sebastopol” and discovered there was indeed a KFC a few blocks south. I finally spotted the internet cafe but I had also come upon another “COPY” store and decided to give it one last shot.

This time I had a winner. The shop clerk greeted me with a smile and a can-do attitude. Even the added complication of having to sign into my gmail and print from there didn’t phase her. Somehow my bill for about 40 black & white print-outs, 4 staples, 1 black & white photocopy and 1 envelope came to €18.60, despite the sign stating that copies were 10 cent per page, but at least the project was complete.

Here is the lucky winner, if you are looking for a “COPY SELF” as they call them in Paris:

But really, if you need to print more than 3 or 4 pages, my recommendation is to buy your own printer. It might be cheaper.