My least favorite word in the French language was and may still be the word normalement. Normalement basically means “if all goes according to plan”. When you add normalement to a response, it means the thing should happen. For example: 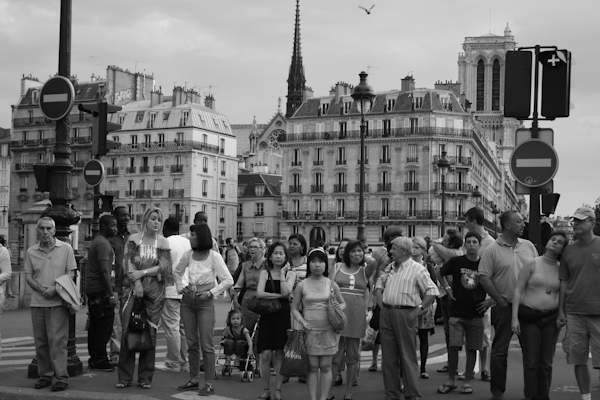 Why do I hate this word? Because it denies all responsibility. It turns a “Yes” into a “Yes, you obnoxious inquirer, but don’t come blaming me if something changes. I didn’t promise anything.” In effect, normalement is a just a CYA addition.

But my latest pet peeve or bête noire as the French would say, is « pas du tout », sometimes shortened to just « du tout ». Of course there are legitimate reasons to say “not at all”, but I think it is far overused in French. Two examples:

Example 1: A couple of weeks ago, I was walking with a friend down rue du Faubourg-Poissonnière, the border between the 9th and 10th arrondissements. I was looking for a place to get photocopies done. We came across a shop that said, among other things, “Printing”. My friend suggested that I try them. I said no, I’ve lived in Paris long enough to know that if they don’t specifically say “Copying”, they will not do copying, and not only will they tell me know, they will laugh at me for even asking! “Don’t be silly,” he told me. Might as well ask. So I did. And the response? « Pas du tout, Madamoiselle ! » Was this really necessary? Had they just said “Sorry, no” would that have left some doubt in my mind that maybe they still did some copying, if I just asked more politely? When I asked if the shopkeeper knew where I could make copies, he said “all over!” but it still look me another 20 minutes to find a place.

Example 2: I walked into a boulangerie asking if they sold pain feuilletée, a delicious cross between a baguette and a croissant. Again, the response was « Pas du tout, Madamoiselle ! » At least I got a « désolé » this time too. But had the response just been “no,” would I have assumed that they do make pain feuilletée but only on certain days? Or that they make it but had sold out already?

I am sure the English language is chock-full of annoyances as well, when heard by the non-native ear. Please feel free to point them out to me!