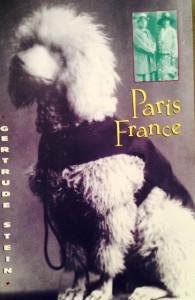 I just finished reading Gertrude Stein’s Paris France. I think I learned more about Stein herself than about Paris.

Her style is…unique. It’s a brand of almost child-like stream of consciousness that allows the reader to almost see her brain jumping from place to place as you read the words.

Stein lived in Paris for 30+ years as an adult, but she also lived there when she was a child of four and five years. She herself admits that some of her impressions were left over from her perspective as a young child.

Let’s also keep in mind that the eccentric crowd Stein hung out with was not exactly comprised of your typical Frenchmen.

Stein uses sweeping generalizations. She paints the French as fairly uniform in their mindsets. But I dare any foreigner who’s lived in France for any length of time to argue that some of these generalizations, albeit describing a France of 1940, don’t ring a bit true nonetheless.

Here are a few excerpts. What do you think–is there some truth to these descriptions, even in modern day Paris, or is it a load of crap?

So there are the two sides to a Frenchman, logic and fashion and that is the reason why French people are exciting and peaceful.

Dogs which are not useful dogs are a pastime, as one woman once said to me, one has a great deal of pleasure out of dogs because one can spoil them as one cannot spoil one’s children. If the children are
spoiled, one’s future is spoilt but dogs one can spoil without any thought of the future and that is a great pleasure.

So naturally although the French do have as every country seems to need to have that adolescent intellectualism of the negation of the family in their hearts it is not so. That is one of the reasons that French people are not snobs.

I have to admit that Stein’s style here wasn’t really my thing. But it’s a short read–it probably won’t take you too much more than an hour to cover to cover (OK, a bit longer if you really stop to try to decipher every last thing she is saying). So not a huge commitment. Worth the risk. You may just love it.

If you’re still not sure, read Adam Gopnik’s “Understanding Steinese” introduction to Paris France before you take the plunge.

Have you read Stein’s book? Or any of her other works? What did you think?