There is a lot of worry and uncertainty, but also excitement in the air right now surrounding the French elections. This past Sunday, in the premier tour, 77.77 % of registered French voters narrowed the field down from eleven candidates to just two. (If you missed John Oliver’s summary of the players, it’s definitely worth watching here.) 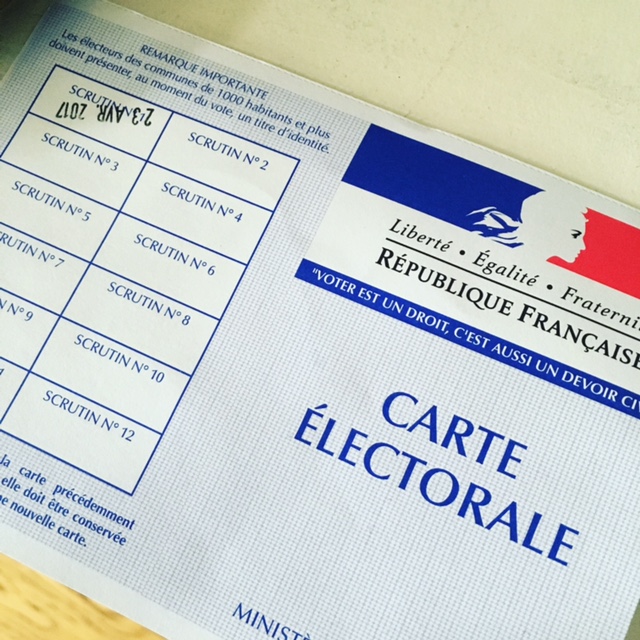 Emmanuel Macron of the newly organized En Marche! movement earned 24.01% of the vote in the first round; Marine Le Pen of the Front National received 21.3% of the vote. The Guardian offers the full set of results as well as some interesting maps showing voting by department. France Info also offers results by department and by city.

The two frontrunners will face off on Sunday, May 7th in the second tour.

Sunday was my first opportunity to vote in France and my first opportunity to vote anywhere in possibly 20 years in person. Yes, of course I’ve always voted but for may years in U.S. elections, I’ve been voting by absentee ballot. I was so excited to vote Sunday morning, I actually jumped out of bed, forewent my morning coffee, threw on clothes, grabbed my ID and my carte électorale, and rushed out.

There was heavy security outside my Marais polling station (i.e. men with machine guns). This may have in part been due to the fact that you must walk through the Memorial de la Shoah to get access my station. Once inside, I had to confess to the organizers that I had never voted in France before so I didn’t know what I was doing. They handed me a small envelope and pointed to the 11 piles of small white papers with candidates’ names printed on them. They explained that I should take a few (just to throw them off course) and–in a private booth if I preferred–put just the name of the candidate I support in the envelope. I did so, then got in line.

I didn’t have to wait long. There were perhaps 10 people in front of me. When it was my turn, I handed my carte électorale and my carte d’identité to the monitor. He shouted out my number (written on the electoral card) so the other volunteers could check off my name on the list to be sure I wasn’t voting twice. Then he gestured to me that I could drop my envelope in the big clear box. As I did so, he yelled, “A voté!”, the phrase they will say to every voter at every polling station as they cast their vote. “Has voted!”

Unfortunately I will not be in France for the May 7th elections, but there is no chance in h*ll I’m not voting. And if you’re eligible to vote in France, please, please, please be sure to vote as well! These elections are too important to take any chances.

If you can’t vote in person and if you’re not already signed up to vote at an overseas consulate (the deadline was December 31st), you still have a few more days to arrange for someone to vote for you by proxy. Anyone registered to vote in your commune can vote for you, so long as they are not already voting for someone else by proxy and so long as they go to your bureau de vote to cast your vote for you. (Best to read all the nitty gritty rules here.)