Barbizon & the Forest of Fontainebleau

I am on a mission this summer to find more day trip options from Paris that do not require renting a car, and in particular, more hiking options.  I head to Corsica to finish the GR20 long-distance trek just 10 days from now and I need all the training I can get!  A hike from Fontainebleau to Barbizon and back turned out to be the ideal excursion for yesterday’s perfect weather.  All in all we estimated that we hiked about 30 kilometers (plus another five home from Gare de Lyon!) but if death marches are not your cup of tea, there are ways to make a shorter route of it (or combine hiking with some cycling) and still enjoy a walk in the woods and the charm of Barbizon. 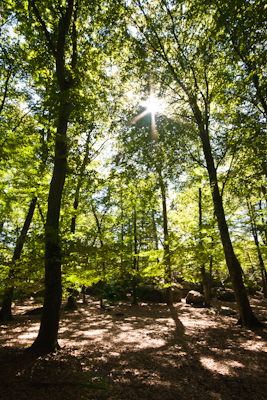 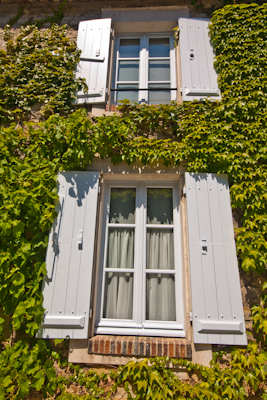 Whether you choose our longer route or a shorter variation, you can combine a visit to Fontainebleau (to the Château, time permitting) with the tranquility of the forest, as well as time in Barbizon, the “village of painters”, where painters such as Jean-François Millet and Théodore Rousseau congregated, starting in the 1820s, forming what is now known as the Barbizon School.  For more information on the history of this movement that focused on landscape and nature, see the description provided by the Metropolitan Museum of Art.

Finding the Trailhead and the Walk to Barbizon (or, Why You Should Read the Directions to the Start of the Trail and not Simply Carry them in Your Pocket)

SNCF trains leave (and return) about every 30 minutes from Gare de Lyon in the 12th arrondissement to Fontainebleau-Avon (click here to check the timetable for your itinerary).  We paid only €12 each for a day pass on the train (cheaper than a round-trip).  From the Fontainebleau-Avon station, buses leave frequently for the center and Château of Fontainebleau (Take the “Ligne A” bus in the direction of Les Lilas, getting out at the “Château” stop), or you can walk the three or so kilometers.  Opposite the main entrance to the Château is rue Royale, which leads northwest towards the campus of INSEAD, the world-renowned business school.  Follow rue Royale to the end (stopping at the Office of Tourism (4 rue Royale, 77300 Fontainebleau, Tel.: 01 60 74 99 99, info@fontainebleau-tourisme.com) just a few doors down on the right for a large map; click here for a small version of the map).

If you read French, you may find the instructions for the trail useful.  Unfortunately, you may also find directions to the start of the directions useful.  That’s what I am here for: 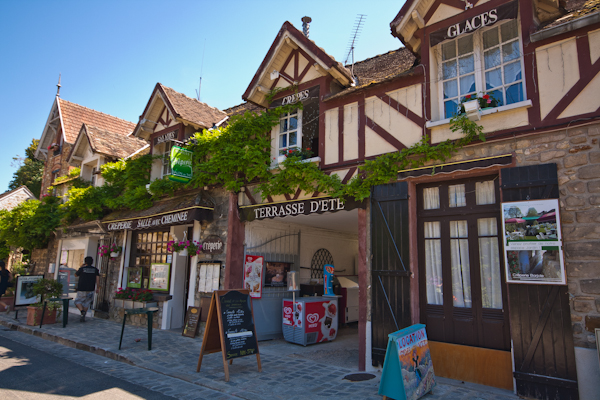 A stroll along the Grande Rue in Barbizon is a must—the stone houses give the town a “village” feeling, though Barbizon does not want for shops and restaurants.  The town has several museums and artists’ studios (some historical and still used today) that you can visit.  The France Digitale site offers a useful self-guided walking tour of Barbizon.

Those of you who have lived in New York may associate the name “Barbizon” with the modeling school.  While I do not believe the two are connected, the original Barbizon does share one attribute with its knock-off: both apparently have a stringent dress code.  The restaurants in Barbizon are relatively chic and snobby.  Not everyone was so friendly to us.  We tried about six locales—some were far out of our price range, some required a 3-course set menu, one terrace denied us for wearing shorts, one hostess announced “fermé” when we entered at around 2pm although the sign clearly said open “non-stop” until 4pm—before settling on an inexpensive crêpes spot on the Grande Rue in a cute courtyard with plenty of selection and an intimidating yet friendly-in-that-brusk-sort-of-way waitress/MC.  I’d be quite happy to return to the crêpes restaurant or bring a picnic next time, but if you are looking for finer dining, be sure to bring appropriate attire.

The Return to Fontainebleau

We planned to trace our steps back to Fontainebleau, but feeling ambitious, we opted to take several excursions into the forest, veering off the paved path several times to immerse ourselves in wilder parts of the forest.  The forest is scattered with enormous boulders that gave us the impression that we were hiking in a much more mountainous region (Be sure to return for the Circuit des 25 bosses, or Loop of the 25 humps, for some of the most rigorous hiking in the Paris area.)  If time allows, it is well worth a side-trip into the Gorges d’Apremont, with its caves, boulders and bizarre rock formations, valleys and sandy paths.  (Another good option would be to do the “FB” path by bike, with side trips by foot into the gorges and forest).  If you have a decent sense of direction, you should be able to find paths that are more or less parallel to the “FB” path and eventually wind your way back to the “FB”.  It’s the only paved path around, so you know when you have found your way back to it.  The arrows on the “FB” markers on the ground point towards Barbizon, so you always know which way to walk when you reach the main trail again.

There is an endless network of trails to explore in the Forest of Fontainebleau.  At the price of €12 plus the cost of food, I plan to return often.