Paris’s Jeu de Paume was originally built as an early-version-of-tennis court for 17th century nobility.  This mausoleum-esque building in the northwest corner of the Tuileries Gardens (mirroring the Orangerie Museum, the impressionists’ haven in the southwest corner of the Tuileries) is now used primarily for temporary photography exhibits.  The exhibit space at the Jeu de Pomme is not huge; it should not take more than an hour and a half to see the entire exhibit, making this museum an excellent choice for a brief flirtation with culture or a pre-dinner foray on a Tuesday night when the museum is open until 9pm. 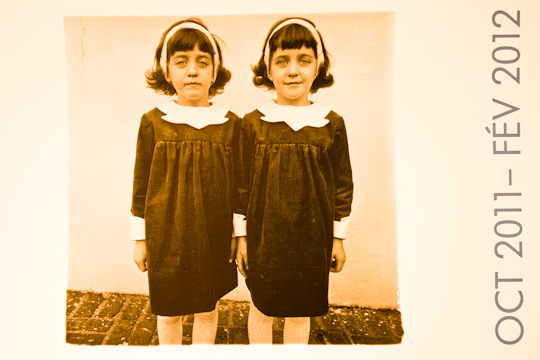 From October 18, 2011 to February 5, 2012, the Jeu de Paume is home to a collection of 200 photographs of Diane Arbus (1923–1971), an American photographer who captured images of her primarily New York subjects in the 1950s and 60s.  Few photographers capture facial expressions and the emotions behind them as honestly and transparently as Diane Arbus.  She was able to safeguard on paper such personal moments that some of her works actually made me feel as if I were trespassing into someone else’s private world.  On the other hand, I felt that some of her works simply stood out because of their shock value.  Her subject of choice is clearly what nowadays we call the “freak show”.  Photographing the odd creature once in a while is understandable, but after viewing about 100 pathetic and frequently disgusting specimens I was bored.

Whether you are moved by Diane Arbus’s work, hate it, or (like me) fall somewhere in between, the exhibit will certainly give you something to talk about over dinner.

For further details on the exhibit, see the website for the Jeu de Paume.