In recent years, the Paris Mayor’s office (both under Bertrand Delanoë and now Anne Hidalgo) has launched an aggressive campaign to discourage car traffic in the city center. Last week, I wrote about the (very) temporary driving ban. I have also written about the city’s famous bike-sharing system, Velib’. 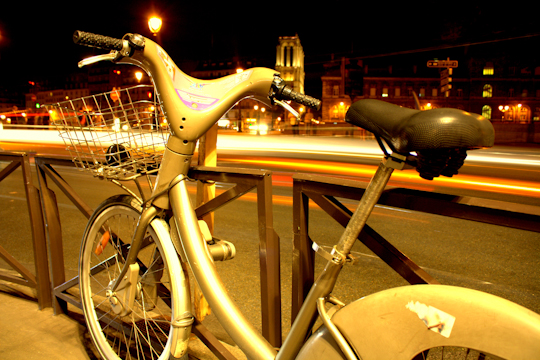 Personally, I’m a huge proponent of the Velib’ option in concept, but I’m an intermittent fan of the Velib’ in practice. It goes like this: 1) I start Velib’ing around (yes, “Velib’ing” is proper franglais), 2) I get all pumped up to Velib’ everywhere and avoid the metro, 3) I get out of town for a bit or winter sets in and it’s too cold to Velib’, 4) I forget how much I enjoyed the Velib’s and return to being terrified to cycle around Paris with its crazy traffic, so I take a few months off, then 5) Something finally prompts me to get back on a bike and the cycle starts again….

But for those of you who, like me, are still a bit terrified of Paris traffic, did you know that there are 700 kilometers of bike paths in Paris? Most are designated lanes on the streets (and oftentimes shared with buses and taxis… yep. Really smart.) Some bike paths now run in the opposite direction of the car traffic. I find this to be only slightly better for the cyclists’ longevity and disastrous for the unsuspecting pedestrian who doesn’t think to look both ways when crossing a one-way street. But the true bike lines are expanding and slowly drivers are getting accustomed to bikes everywhere.

Last week, Mayor Anne Hidalgo announced her plan to make Paris the « capitale du vélo » (bike capital of the world). The plan includes, among other initiatives, 1) doubling the number of bike paths in the city, to reach 1400 kilometers by the year 2020, and 2) creating at least two bike-only paths that run North-South and East-West across the entire city. If approved by the Conseil de Paris, this plan would require an investment by the city of over €150 million.

The idea is not just to encourage using bikes over cars as a practical matter, but to create a “cycling culture” among Parisians and tourists drawn to the city. Paris is not quite Amsterdam yet, but we’re at least moving in that direction…. slowly.

Before your next 2-wheel Paris expedition, check out this map of bike paths in the city and in the city’s two largest parks, the Bois de Boulogne and the Bois de Vincennes.

It’s also very helpful to load the Velib’ app onto your phone before you set out!